Today is the official release day of the Beltane Born album. Check out the shop for details.

The new album by Beltane Born – the solo project of Wuthering Heights founder Erik Ravn – is
ready and will be released through Nagelfest Music on 16 July 2021. More details in the shop.
You can listen to a song from the album here: https://www.youtube.com/watch?v=5TUzNfBXHSc
Hello friends,
The German online magazine “Musik An Sich” have posted reviews of the first two Wuthering Heights reissues.
You can read them here:
https://www.musikansich.de/review.php?id=22162
https://www.musikansich.de/review.php?id=22286
Cheers!
Erik
Today is the official release day of the “To Travel For Evermore – special edition” 2-CD by Wuthering Heights. We’re really excited to make this epic album available again, with much improved sound and lots of bonus extras.
Check out our shop for details on how to get your hands on this metal classic – and stay tuned for more releases in the special edition series.

The next of the Wuthering Heights reissues – “To Travel For Evermore – special edition” will be released 31 March 2021. You can pre-order your copy now in the SHOP section.

The current issue of the German magazine ROCK HARD contains a review of the new “Far From The Madding Crowd – Special Edition” CD by Wuthering Heights in their “From The Underground” column. More info here: 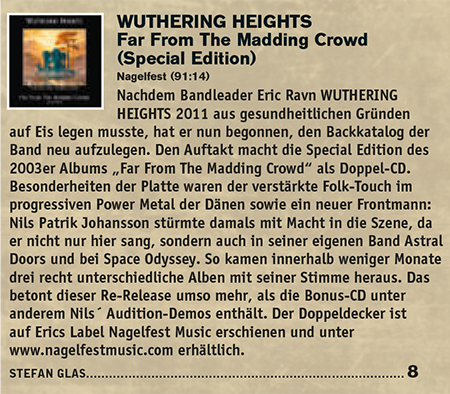 Today is the official release date of the new “Far From The Madding Crowd – special edition” 2-CD by Wuthering Heights. It has taken us a long time to get this done, but now it’s finally here. And we’re already preparing the next reissue in this series, so stay tuned.
Check out our shop for more details on how to get your hands on this metal classic.

We’re ready to take your pre-orders of the new ”Far From The Madding Crowd” special edition 2-CD set. Orders will be shipped when we reach release date, 1st December.

Check out our shop for details, prices, shipping rates etc. Also check out the other cool stuff we have for sale.

We’re so happy that this album will be available again. And remember: the rest of the Wuthering Heights catalogue including more bonus goodies will follow, so stay tuned.

Please help us by spreading this news.

The first installment will be the ”Far From The Madding Crowd” album set to be released on the 1st of December. The album has been lovingly remastered by famous Danish producer Jacob Hansen for optimum sound. And fear not – we have not altered the sound very much. This album sounded pretty good to begin with (it even won ”hardrock album of the year” in a Swedish hi-fi magazine), so we’ve only done subtle changes to bring it in line with today’s technical standards.

The album will also have a totally redesigned booklet with lyrics and liner notes by yours truly. And if that wasn’t enough the set will include an additional CD with rare bonus material.

The WH reissues will be available exclusively through Nagelfest Music. That means that you’re buying directly from the band with no middle men. Since Nagelfest Music is a completely independent DIY label, it also of course means that we have no resources for doing a big advertising campaign – and so we need YOU to help spread the word. So please support the band by telling your fellow music fans about these reissues and how to get hold of them.

We will let you know as soon as we are ready to take pre-orders.

Fill out form for order

We do not store or handle your data for other purposes than processing your shop orders, except to the extent that we are obliged to do so for accounting purposes.

We will not contact you unless by your request or in connection with your shop orders.

We do not trade or sell your data to any third party.

All prices are in Danish Kroner (DKK).
Please note that your country may add additional toll and tax (non-EU customers).
All merchandise is packed in protective packaging and shipped by PostNord at standard rates.

About cancellation:
1. According to the Danish Consumer Contracts Act you have the right to return the merchandise no later than 14 days after reception, if you regret your purchase. In this case we will refund the entire price and all costs in connection with the sale and shipping, if you have already paid the included invoice.

2. The right of cancellation will be void if the merchandise has been used. The seal on compact discs must be unbroken.

3. When returning merchandise you must state your name, address, invoice number and e-mail address for the returning of money via PayPal.

You must pay the shipping costs for the returning of the merchandise.