Skip to content
Issue 416 of German magazine ROCK HARD contains a review of the “The Shadow Cabinet – Special Edition” CD by Wuthering Heights. Once more the review is by Stefan Glas in his “From The Underground” column. Unfortunately, the actual rating has somehow fallen out of the magazine layout, but according to Mr. Glas, it would likely have been an 8/10.
Furthermore, in the same issue Erik Ravn’s “Beltane Born” album is also reviewed in the “Demos & Eigenproduktionen” column (which does not give ratings as such).
See more here:
www.rockhard.de
www.facebook.com/rockhardmegazine
www.facebook.com/UndergroundEmpire 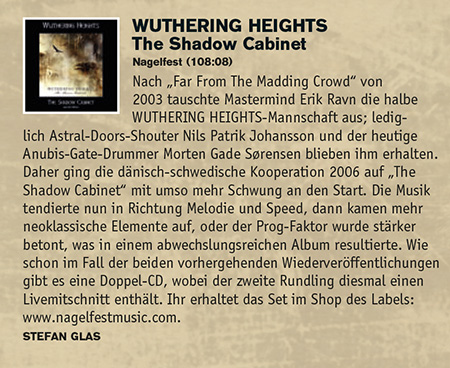 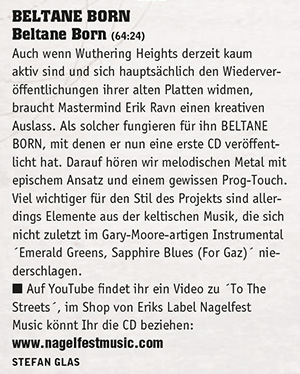 Fill out form for order

We do not store or handle your data for other purposes than processing your shop orders, except to the extent that we are obliged to do so for accounting purposes.

We will not contact you unless by your request or in connection with your shop orders.

We do not trade or sell your data to any third party.

All prices are in Danish Kroner (DKK).
Please note that your country may add additional toll and tax (non-EU customers).
All merchandise is packed in protective packaging and shipped by PostNord.
About cancellation:
1. According to the Danish Consumer Contracts Act you have the right to return the merchandise no later than 14 days after reception, if you regret your purchase. In this case we will refund the entire price and all costs in connection with the sale and shipping (except return shipping), if you have already paid the included invoice.
2. The right of cancellation will be void if the merchandise has been used. The seal on compact discs (if any) must be unbroken.
3. When returning merchandise you must state your name, address, invoice number and e-mail address for the returning of money via PayPal.
4. Merchandise must be returned to:
Nagelfest Music
c/o E. R. Christensen
Engvej 2
DK-5853 Ørbæk
Denmark
5. You must pay the shipping costs for the returning of merchandise.